How to choose the best elution solvent for SLE?

Choosing the SLE correct elution solvent based on analyte properties produces the cleanest extracts with the highest recoveries.

Supported Liquid Extraction (SLE) using ISOLUTE SLE+ is a great alternative to liquid-liquid extraction (LLE). If a sample can be extracted by LLE, it will usually work by SLE. The more hydrophobic the compound, the more hydrophobic your elution solvent can be, producing cleaner SLE extracts. A good rule of thumb is that if your analyte has a logP ≥ 1, it is a good candidate for SLE. Some analytes with negative logP values will also work by SLE+, but more hydrophilic or polar analytes require a more polar elution solvent. Remember, an elution solvent for LLE or SLE must be water immiscible. Even water immiscible organic solvents can have some water solubility. Solvent polarity and water solubility can affect extract cleanliness.

I’ve summarized the polarity and water solubility of some organic solvents we commonly recommend for SLE extraction in the table below, arranged by increasing polarity: 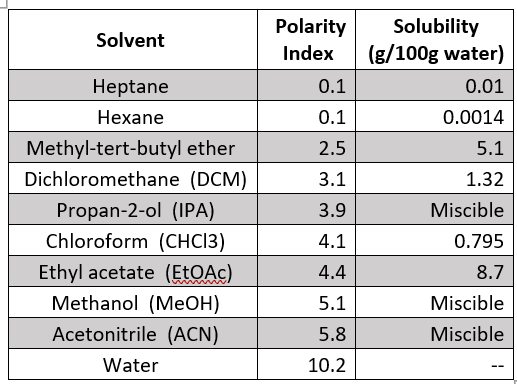 Aliphatic hydrocarbons like hexane and heptane are the most non-polar of our commonly used elution solvents. Organic solvents that have a dipole moment, like MTBE, dichloromethane and chloroform are more polar, but still water immiscible. Notice the increased water solubility of these solvents compared to hexane and heptane. Ethyl acetate is our most polar water immiscible solvent – it’s actually more polar than isopropanol (IPA), and the most water soluble. Methanol and acetonitrile, which can be used to modify the SLE elution solvent, are the most polar and are also water miscible. IPA can also be used to modify the SLE+ elution solvent.

Using a more polar organic solvent or adding a water miscible organic modifier to your SLE elution solvent can improve partitioning of analytes with a logP ≤ 1, but care must be taken to not overdo it. More polar elution solvent combinations will improve recovery of more polar analytes, but it can also increase extraction of interferences from the aqueous sample.

If your analytes can be extracted with 100% hexane or heptane, that will give you the cleanest extracts. Next MTBE and DCM provides very clean extracts. Adding IPA to DCM can improve recovery of more hydrophilic compounds with lower or negative logP values. You can also try adding very small amounts acetonitrile or MeOH. Ethyl acetate works well for elution of more polar analytes, but extracts will not be as clean. I have tried 90:10 ethyl acetate:IPA for elution of a large drug panel in urine by SLE+. The combination gave good recovery of more hydrophilic analytes, but increased matrix effects for some compounds.

So, what’s a method development chemist to do? Know the logP and pKa of your analytes of interest. Use the most nonpolar solvent you can. Try combinations of hexane and ethyl acetate and choose the lowest amount of ethyl acetate that provides the desired recovery. Modify DCM with 5-10% IPA or 1-2% MeOH or ACN. Extracts will not be as clean, so calculate recovery, matrix effect and process efficiency to find the elution solvent with the best recovery and the lowest matrix factors.

Click on the link below for more information on elution solvent properties.