Believe it or not, we’re all familiar with emulsions.  Have you ever added food oil to a pot of water while cooking?  That’s an emulsion.  Do you put dressing on your salad?  It should be called salad emulsion – although, that may not have the same edible appeal.  Do you drink milk?  Emulsion.  What about milk?  Butter?  Eggs?  All emulsions.

If we’re referring to emulsions in the laboratory, the examples are different, but the chemistry involved is very similar – as are the mechanisms for breaking them.

When you look up the definition of “emulsion,” you typically see a lot of chemistry-related terms like “colloid” and “immiscible” and “dispersed phase.”  While those terms are helpful, it can make an emulsion seem more complicated than it really is.  In its basic form, an emulsion is a combination of liquids that don’t mix with each other.  The mixture can contain any number of liquids, but there have to be a minimum of 2 and they should all be liquids – in other words, you can’t have a solid and a liquid in an emulsion.

How Does an Emulsion Form?

This question was answered briefly in this blog post which reviews SLE, SPE and LLE, but let’s expand on that using this graphic.  If you start at the top, the image labeled “A” illustrates a mixture of liquids that won’t blend together to form a homogenous solution – in other words, they’re immiscible.  For purposes of example, we’ll refer to the blue liquid as “aqueous” layer and the orange solution will be the “organic” layer.  It’s important to note that the solution has not formed an emulsion at this point. An emulsion starts to form when one of the liquids breaks up into droplets and starts to spread throughout the other liquid.  The image labeled “B” illustrates the organic solvent dispersing throughout the aqueous layer.  It’s important to note that the droplets don’t dissolve into the other liquid and form a homogeneous solution.  They just disperse throughout the aqueous liquid.

If the mixture contains compounds that have surfactant-like properties, these compounds will be somewhat soluble in both liquids.  Why is that?  Surfactants are amphiphilic – in other words, it’s a compound that loves and hates water.  The hydrophobic part of the compound will stay close to the organic solvent droplets and try to avoid the aqueous layer as much as possible.  The hydrophilic part of the surfactant will avoid the organic droplets as much as possible.  The surfactant finds partial solubility in both liquid layers which creates a bit of a gray area between the liquids.  At this point, you’ve formed an emulsion (image “C”) and it’s often hard to tell where the boundary exists between the 2 layers.

Emulsions don’t typically form spontaneously.  There’s usually an event that instigates the formation of an emulsion.  In a laboratory doing sample preparation, emulsions are usually triggered while processing samples by liquid-liquid extraction (LLE).  In order to complete the extraction, this technique requires two immiscible liquids to be shaken together which creates lots of opportunity for one of the solvents to disperse into tiny droplets.

How do You Break an Emulsion?

Emulsions are great if you’re trying to make a tasty salad dressing, but they’re not so great when you’re trying to separate the liquid layers.  So let’s look at some strategies for breaking them up.  It’s important to note that breaking an emulsion is different from stabilizing one.  As I mentioned previously, compounds such as surfactants or emulsifiers can be used to stabilize an emulsion.  But that just keeps the dispersed particles spread evenly throughout the solution.  If you want to break the emulsion, you need the dispersed particles to merge back together and reform the immiscible liquid layer you started with before the emulsion formed.  Here are some strategies to break that emulsion:


In my opinion, prevention is always the best way to tackle an emulsion, so my preferred strategy is to use SPE for extractions instead of LLE.  How do you prevent the formation of an emulsion?  Process your samples using solid-phase extraction (SPE) instead of liquid-liquid extraction.  Why would switching to SPE prevent emulsions from forming?  Just like LLE, you’re using organic and aqueous solutions (which are typically immiscible), but unlike with LLE, you’re not using them in a way that lets them interact with each other.  Analytes in an aqueous sample are retained on a solid sorbent that is dried (i.e. all the water is removed) before the organic solvent gets introduced for elution.

Want to learn a little bit more about emulsions and SPE?  Check out this great video! Click on the watch video now button below. 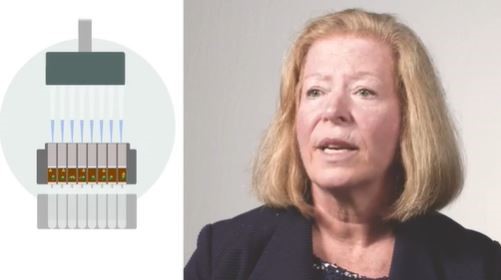