Bisphenol A (BPA) is one of the most widely produced chemicals in the world – approximately 4 million metric tons annually. In recent years, BPA has received a lot of negative attention. In fact, I can’t remember the last time I saw a plastic item in the store that didn’t have a “BPA free” marking on it.

These labels are for good reason, though, as BPA has been found to produce negative hormonal effects within the body. BPA is a chemical that mimics estrogen and disrupts the endocrine system, which can lead to developmental disorders, thyroid issues, diabetes, and even reproductive organ cancers. BPA is so prevalent because it has many uses in polymer chemistry. First and foremost, BPA is used as a monomer in the production of polycarbonate, a very hard thermoplastic that has countless applications, including water bottles, baby bottles, CDs, DVDs, eyeglass lenses, and many more.

BPA is also used as an antioxidant additive in polyvinyl chloride (PVC). The two hydroxyl groups on BPA molecules make them very resistant to oxidation, which explains their widespread use. PVC is the third most-produced polymer in the world with applications ranging from siding on houses, to pipes, bottles for cosmetics, vinyl records (well maybe not anymore), intravenous (IV) bags, and even toys for kids. When BPA is used as an additive for its antioxidant properties, it is added in free form, which means that it has the ability to leach out of the polymer into whatever the extraction matrix is. The highest risk of exposure to free-form BPA is from toys and IV bags (anything that will come into contact with a solvent prior to entering the body). Unreacted BPA monomer can be extracted from polycarbonate products. BPA can also be released from the hydrolysis of polycarbonate. The most common leaching of BPA is from baby bottles and from children’s toys.

Personally, it makes perfect sense as to why the analytical community has become enamored with trying to quantitate BPA extractable and leachables in common household items. A lot of extractable and leachable studies are performed to try to simulate exactly how a product comes into contact with the user. For example, if a baby puts a toy in his or her mouth, the extraction solvent would be saliva, which is a very complex aqueous matrix made up of enzymes and salts. Trying to perform an extraction and more importantly, trying to analyze a matrix of salts and enzymes with either an LC/MS or GC/MS could produce chromatograms with analyte signals that are hard to measure. Solid-phase extraction (SPE) is a very powerful tool when trying to eliminate matrix effects and, in doing so, increases the signal to noise ratio of the analyte signals. To simplify things even further, the extraction can be performed using a reverse-phase interaction between an aqueous extraction solvent and a divinylbenzene stationary phase. 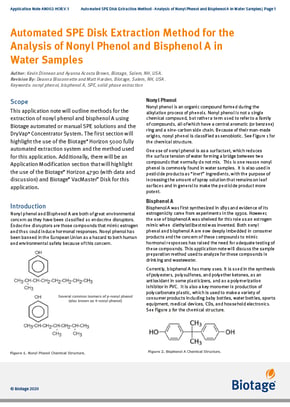 concept is highlighted really nicely in the application note Automated SPE Disk Extraction Method for the Analysis of Nonyl Phenol and Bisphenol A in Water Samples. Not only is BPA quantified with high precision and accuracy, but the extraction step is automated, which allows me to calibrate my instrument – or grab an extra cup of coffee – while my samples are being prepped.

What are the challenges you face when doing your BPA extractions?         Share them in the comments below!