Organochlorine Pesticides: The Good, the Bad and the Ugly

“Pesticides” is one of those terms that invokes a wide range of emotions in people. Some people smile when they think of the insecticides that keep their award-winning flower garden looking beautiful all season.

Some people feel grateful for the algaecides in their fish tank that let their kids’ pet fish (who’ve probably been given cute names like “Nemo” and “Frankie Fish”) swim around freely, without having to navigate around huge algae blooms. Then there are other people who hear the word “pesticides” and think of dangerous chemicals that are sprayed onto our crops, eventually ending up in our food and water supply. In this post, I’m going to walk through the good, the bad and the ugly when it comes to pesticides, but that term actually includes a huge number of compounds, so I’m going to narrow my focus to just organochlorine pesticides for the purposes of this post.

The Good: Pesticides Prevent us From Dying

This may seem like a bold statement to make, but it’s true. One of the most well-known organochlorine pesticides is DDT (dichlorodiphenyltrichloroethane, for those who like to refer to compounds by their full names). Its fame is rooted in its use on troops in the second half of World War II to kill parasites and insects that transmit diseases through the skin – malaria, typhus and the Bubonic plague, to name a few. Four years after the introduction of DDT for this purpose, reported cases of malaria dropped from 400,000 to almost zero!

DDT was also used to fight plant-based insects. A light coating of 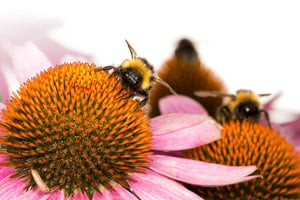 DDT sprayed across a farmer’s field was the perfect solution for protecting the entire crop – and, therefore, our food supply. Likewise, DDT was known for effectively killing household pests like termites – i.e. those insects which feed on wood and can slowly weaken an entire wooden structure (like a house).

There are many more examples of where DDT – and other organochlorine pesticides – have been used for these types of applications, but it’s safe to say that these compounds have prevented us from starving to death, from being crushed under a house that collapses on us, and from dying of typhus or malaria.

The Bad: Pesticides Are Terrible for the Environment

As I explained in the previous section, pesticides play a vital role in our constant battle against insects and other pests.

However, we are finding that the benefits of these chemicals (they’re effective, they’re relatively easy to apply, and they hang around for a long time) are also the problems with these chemicals. It turns out they’re harmful, not just to insects, but to birds, fish, and a variety of other animals – including humans. Their persistence in the environment allows them to accumulate in our air, soil, water which raises the levels that we’re exposed to and makes them even more dangerous for us to keep using. The U.S. EPA has since classified DDT and a number of other organochlorine pesticides as persistent organic pollutants (POPs) and their production and use is significantly restricted.

The Ugly: Pesticides Are Hard to Eliminate

It’s been 60 years since many pesticides stopped being produced and used, yet we are still able to detect quantifiable amounts of these compounds in our water sources. If that isn’t alarming enough, POPs can be transported through the air and water which means one country’s pesticide use could cause a nearby country’s water supply to become contaminated!

When you look at the facts about pesticides – the good, the bad and the ugly ones – it’s clear that we need to accurately quantify them so that we can continue to monitor them and look for ways to remove them. The EPA has been working for decades to monitor pesticides and develop methods to help us extract and quantify them, but it can be a challenging task – for the extraction and for the quantitation.

Here’s just a single example using pesticides in water as an example. If you’re using liquid-liquid extraction (LLE) to extract the pesticides, some of the water matrices you might be working with (wastewater, for example), will form challenging emulsions that can take a lot of time, effort and solvent to try to break up. If your extraction is successful, but you’re using a GC/MS for your analysis, you may have trouble resolving and accurately quantifying your pesticide peaks. Without the right tools, you could easily generate results that are inaccurate, almost to the point of not being meaningful.

With the right tools – in this case, solid-phase extraction (SPE) and a GC with an electron capture detector (ECD) – you’re extraction and quantitation become much more efficient and accurate. If you select a hydrophobic media such as C18 for use with your SPE extraction, not only will you capture all of your organochlorine pesticides on the SPE disk, but you can use a hydrophobic solvent (such as hexane) for the elution. Using hexane for elution eliminates the need to elute using dichloromethane (DCM) and exchanging the solvent from DCM to hexane before analysis (remember, the final solvent can’t be a chlorinated solvent if you’re using an ECD detector to look for chlorinated compounds).

ECD detectors are great at quantifying halogenated compounds (in this example, the halogen is chlorine) and can quantify organochlorine pesticides down to parts per trillion (ppt) levels, even in complicated matrices. This is probably why the EPA outlines the use of a GC/ECD in Method 508.1 (for drinking water) and in Method 608.3 (for wastewater).

Download our poster for more details on extracting and measuring organochlorine pesticides in water and help ensure that quantifying them is the “good” part of the good, the bad and the ugly truth about these compounds.